Anglers CP Gull Roost:  An adult Mediterranean Gull,  a 1st Winter  Caspian Gull  and  5 Yellow-legged Gulls were in this evening. 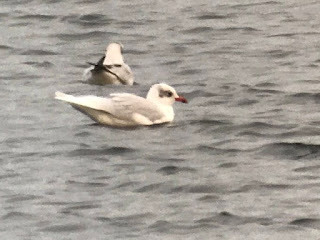 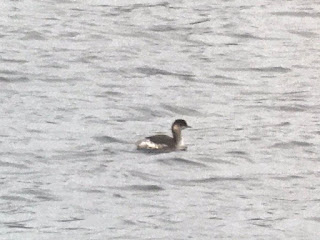 Very quiet with no sign of yesterdays mobile YB Warbler. J Snipe 1, C Snipe 2, Cettis 1, with this species assumed to be a winter visitor with none heard in spring or summer. Linnet 300+, 1 Parakeet, 1 Green Pecker.
Posted by Upland Tyke at Monday, October 19, 2020 No comments:

Her are the Wintersett WeBS counts for September 202o:

It looks as though Cetti's is here to stay, it was singing from the scrape this morning. In addition to the usual stuff, 2 Herring and 10 Common Gulls on the wader scrape. (JP)

The late Ralph Hibbert's funeral service with be at Ardsley Crematorium on Tuesday 3rd November at 10.50am.

120 birds were ringed today. per @BeckyBailey101

Swallow 1.  The juvenile male Garganey was in the north east corner.

A Fox was hunting the wader scrape.      Fungi included: 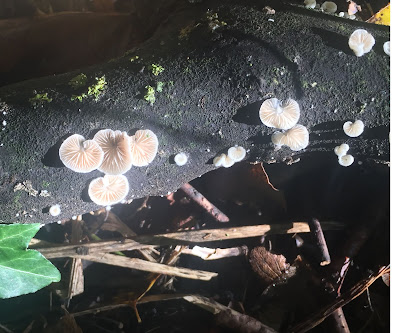 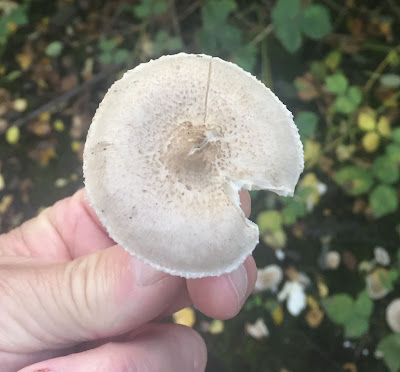 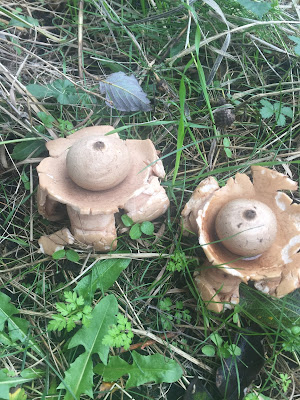 Posted by Cliff Gorman at Saturday, October 17, 2020 No comments:

10 degrees with 8/8 cloud and a north easterly breeze.

Anglers CP: A Stonechat and a Red Kite were in the back fields - per Chris Swaine.  Dunlin 1.  Black-necked Grebe 1.  36 Whooper Swans flew east at 09.00hrs. 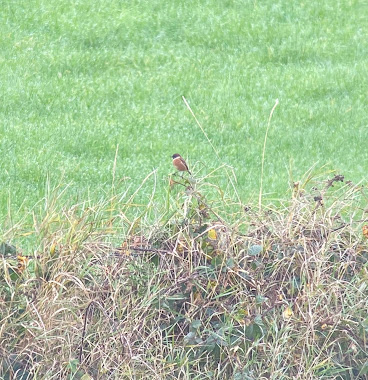 A Migrant Hawker was flying.

Fungi on show included Candlesnuff, loads of Sulphur Tuft and up to 6 Earth Stars.(Dave Smith)

Wintersett Res: The juvenile Garganey still in the north east corner and a Ring-necked Parakeet flew over west (Keith Horne)

Anglers CP: A Black-tailed Godwit and a Dunlin were feeding in  the SW corner.  Black-necked Grebe 3. (Steve Denny)

This morning saw the return of Cetti's Warbler after an absence of 2 years. A male sang briefly before first light and subsequently more strongly from 3 different locations in the marsh up until 09.00hrs. Male and female Tawny Owl also called before dawn. Water Rails called from 3 sites and 6 Redpoll and a Siskin were roaming around. Redwings moving west included 2+20+20+5. (CG)

Meanwhile (JP) was on the top field on the east side of the reserve and saw c100 Fieldfare and c200 Redwing moving north. 10 Skylarks and 6 Meadow Pipits were down on the field of stubble.

On his way home (JP) found a Tree Sparrow in a hedegerow on the Royston Road, Cudworth allotments. This is scarce bird in these parts, the last record for nearby Carlton Marsh was on 25/9/10.

Posted by Cliff Gorman at Thursday, October 15, 2020 No comments:

Going south east: 2 Great Egrets came in to Wintersett Res. at 12.50,hrs. They landed in theWillow Wood tree tops before leaving to south east at 13.00.

Wintersett Res: The juvenile Garganey still in NE corner and a Kingfisher.   per Steve Denny.

Insect: A European Hornet was seen near the cafe. 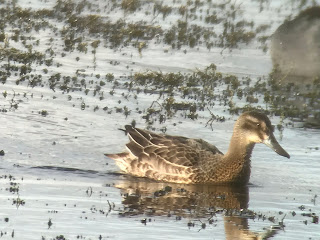 Dave Smith discovered several Earth Stars (Geastrum triplex) on the disused railway embankment, which is new for the reserve. (That's one I never expected here). He also found our annual Shaggy Pholiota (Pholoita squarrosa) in the car park. 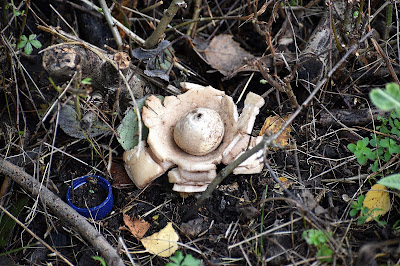 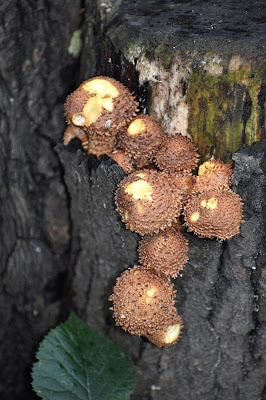 Before dusk 2 Buzzards, 50 Redwing, 15 Starlings and Great Spot Woodpecker. 2 Snipe left the wader scrape west  to feed elsewhere. A Fox was hunting the wader scrape and a Pippistrelle was out and about. (Dave Standish)

Posted by Cliff Gorman at Wednesday, October 14, 2020 No comments:

Posted by ASmith at Wednesday, October 14, 2020 No comments:

A Barn Owl was hunting at the back of the wader scrape at dusk. (Dave Standish)

c50 Fieldfares flew west over the Newtown estate in Cudworth at 14.25hrs. (CG)

Posted by Cliff Gorman at Tuesday, October 13, 2020 No comments:

9 - 12 degrees,  with 8/8 dull cloud and a cool north easterly. Rain from late morning to mid afternoon.

Wintersett Res: The juvenile Garganey still in the northeast corner.  A Brambling was on the north bank.

Anglers CP:  At least 2 Black-necked Grebes still present and our first Fieldfare seen on the east bank.
per Steve Denny.
Cold Hiendley Res:
4 Grey Wagtail. , 4 Redwings, and a  skein of Pink-footed geese in the distance. per Alex Aylward.
Posted by ASmith at Tuesday, October 13, 2020 No comments:

Our mate Ralph Hibbert died this morning! He tested positive for Covid 19 recently and appeared to be reasonably well, but this morning he had a little fall and may have had a blood clot on his brain? He was 81. Ralph was a bloody good naturalist, his passion was identifying and counting butterflies in the locale. He was a pretty good botanist too. About 20 years ago he became one of our wildlife group helping with the management of the reserve. We shall miss his cheeky chappy antics and friendship. Here are few photographs from happier times. 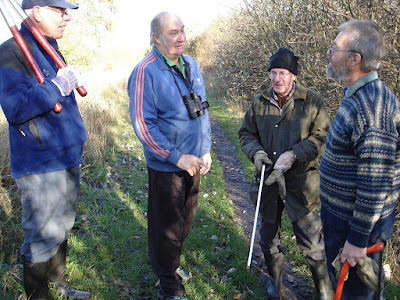 Ralph's got the chair with a group of Barnsley Nats. you might know. 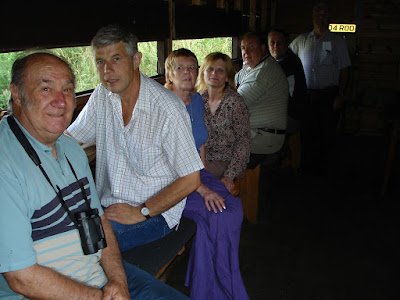 Ralph and Keith Bannister with the lovely Pat Jobling, her daughter in law, Dave Smith and Geoff Miller in the backgrouund 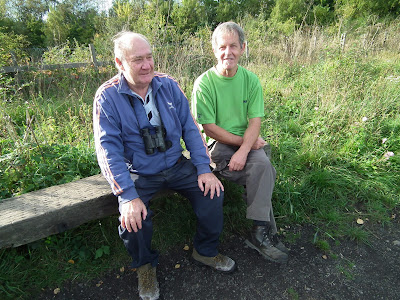 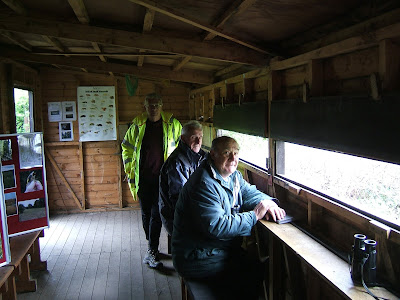 From left, CG, Les Corrall and Ralph on an open day 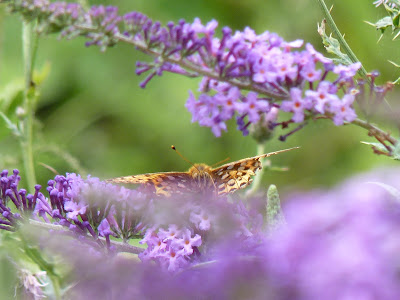 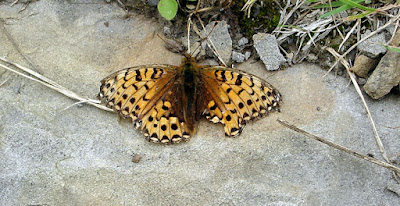 It was somewhat damaged by the time I got to see it a couple of days later.
One of the last things Ralph did was to write his early memories of WW2 for a free local magazine called Chewin T' Cud. It also goes out to ex pats around the world and part 2 is in the next edition.

Clouded Agaric and Jew's Ear was amongst the fungi found.

and 20 days later was retrapped by ringers

at Buckland Marsh, Oxfordshire - a move of 214km South. 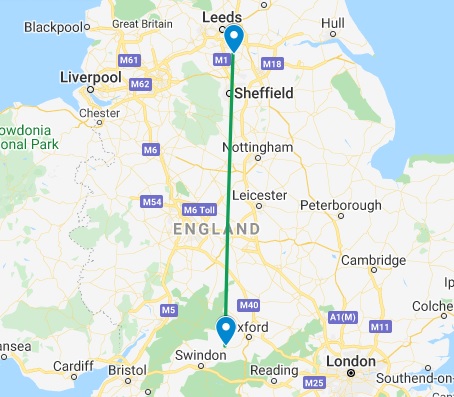