The next BBSG meeting is Thursday 3rd January 2019 at 7.15pm at the Old Moor RSPB visitor centre.

The speaker will be Professor John Reilly on 'The Ascent of Birds; how modern science is revealing their story'. This talk comes highly recommended! John will also have his recently published book on the subject for sale, a book which was shortlisted as one of the best bird books of 2018.

Happy New Year to everybody especially our small dedicated group, who provide me with records all the year round.
Thankyou
Posted by Cliff Gorman at Monday, December 31, 2018 No comments:

Wintersett Annual Round Up 2018

Wintersett Annual Round Up 2018

Weather
January – mainly dull, damp and cold.
February – cold with some light snow.
March – cold with light snow, then wet but milder days with easterlies on the 17th
April – mild and dry for first half, when 23 degrees on the 19th was the warmest Yorkshire April day since records began! Then mainly dull, damp and drizzly until the end of the month.
May was hot and sunny.
June was hot and sunny, but on the 14th, Storm Hector brought high winds that swamped nests at most water bodies. There was a thunderstorm on the 16th .
July was hot and dry until the 28th when there was some very welcome rain.
August was hot and dry, but cooler during the final week.
September was mainly warm and dry with winds from the western quarter.
October warm and dry, with cooling winds during the last 2 weeks.
November was cold
December was cool at first but mild from mid month.

Other highlights:-
2 new rafts, designed and built by Graham Speight, were floated into place at Anglers CP on 24th March.
The first Bee Orchid for Anglers Country Park was found on 6th July
We had epic Vis Mig Days on 22nd September when a record breaking 11,169 Meadow Pipits flew south, and again on 28th October when 6,235 Starlings flew west.

Other Critters
The first Grass Snake of the year was seen on 26th March, followed by numerous sightings throughout the Wintersett Area.
The Soft-shelled Turtle showed up again on 5th July at Wintersett Resevoir for the first time in 4 years.

Odonata
The first records of Small Red-eyed Damselfly were added to the Wintersett list, with sightings at Moorhouse Lane Ponds on 5th to 11th August , and at Botany Bay on 7th August.
There were several records of Lesser Emperor from 2nd to 25th July.
Lepidoptera:
The first Essex Skipper since 2009 was seen at Wintersett Reservoir on 14th July.
2 Lunar Marbled Brown on the 8th May were the first records for the area, and a Barred Hook-tip on the same night was the 2nd record for the area.

And finally:
The Wintersett Team  wish everyone
A VERY HAPPY NEW YEAR  and excellent birding in 2019
Posted by ASmith at Monday, December 31, 2018 No comments:

6 - 9 degrees with high cloud, a few sunny spells, with a warm westerly.
Cold Hiendley Res:  The Siberian Chiffchaff was showing with 5 collybita Chiffchaff  per @Fitzybirder
Wintersett Res: Pink-footed Goose 2.
Owl Boxes built by Chris Swaine were sited around the area this morning with the help of Danny Kirmond and Pete Smith. Great job done by all! 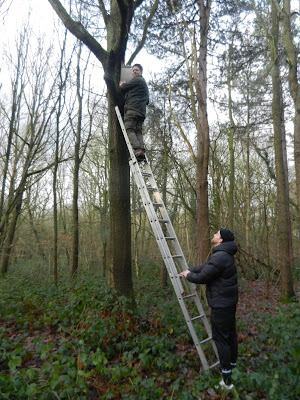 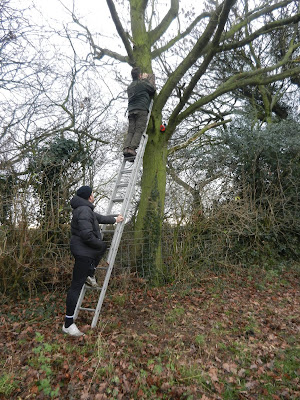 Posted by ASmith at Saturday, December 29, 2018 No comments:

Sewage farm. - highlights, Water Pipit 1, Chiffchaff 6+ with one minus a tail, Goldcrest 1, Goosander fem showing well on river. Very big flocks of Golden Plover and Lapwing in fields just w of the M1 motorway and just n of A635 at cawthorne basin. Difficult to count but thought to be c 2000 Goldies and c 1000 Lapwing. Also big numbers of Woodpigeon here but no sign of yesterdays Red Kite up the road.
Posted by Upland Tyke at Friday, December 28, 2018 No comments:

Posted by ASmith at Thursday, December 27, 2018 No comments:

Images from the 24th - A variety of larvae keeping this bird happy on a cold morning as it fed in one of the streams. 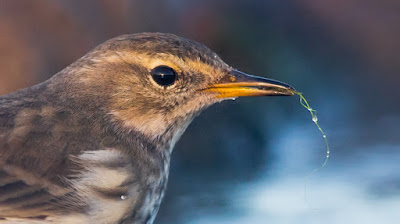 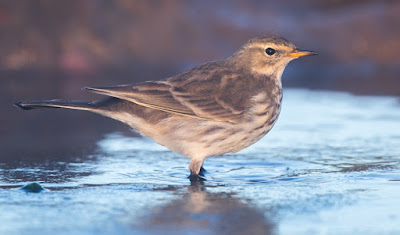 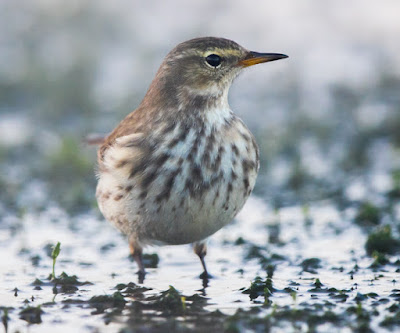 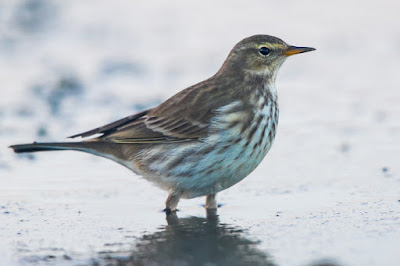 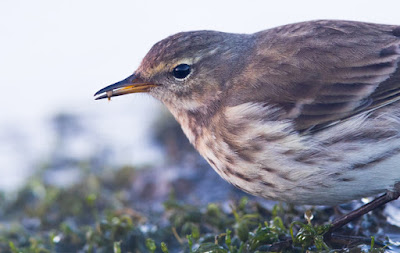 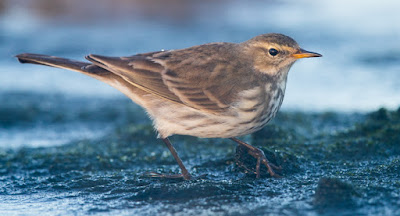 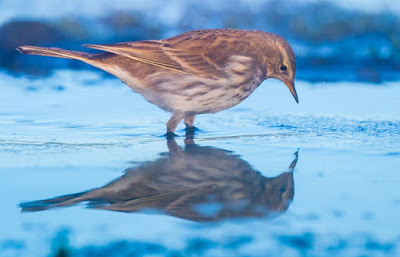 Posted by Peter Garrity at Tuesday, December 25, 2018 No comments:

A late afternoon walk down the marsh following my turkey cupasoup lunch was rewarded with three possibly four water pipits amongst 48 meadow pipits.
Posted by Nattereri at Tuesday, December 25, 2018 No comments:

2 - 7 degrees, light frost, 2 -7 degrees with clear sky and a very light south westerly.
Cold Hiendley Res:  A Siberian Chiffchaff,  a Chiffchaff and 22 Meadow Pipits were in the Sewage Works area.  A Willow Tit was on the south bank.   35 Pink-footed Goose flew west at 09.54hrs.
Posted by ASmith at Monday, December 24, 2018 No comments:

Kingfisher and Coal Tit were amongst the birds caught this morning. Also present Great Spot and Green Woodpecker (CG).

This afternoon 46 Gadwall,15 Teal, 3 Shoveler, 150 BH Gulls, 10 Common Gulls, 40 Herring Gulls were all on the wader scrape. As dusk approached c500 BH Gulls headed north to the Wintersett roost. A Buzzard came in at 15.20hrs and 6 Yellow Buntings came it roost at 15.30hrs. 8 Pied Wagtails flew SW heading for the roost at Ardagh glass? and a pair of Tawny Owls flew across the scrape at dusk. (Dave Smith)
Posted by Cliff Gorman at Monday, December 24, 2018 No comments:

7 - 9 degrees with 8/8 cloud and a light south westerly.
Anglers CP: Green Woodpecker 2.  Pink-footed Goose 4 + 60 west at 15.07hrs.
Cold Hiendley Res: Scaup 1 juvenile male + 1 juvenile.  A group of 5 Chiffchaffs were around the Sewage Works.  At least 2 of them were wearing rings, one of which was probably the Siberian Chiffchaff ringed in the ruin area on 15.11.18.
Wintersett Res: A singing male Cetti's Warbler was on the west bank.

Posted by ASmith at Saturday, December 22, 2018 No comments:

This morning with Dave Smith. 30 Herring Gulls left the wader scrape late morning, but 55 were present at mid-day including an adult with a yellow darvic ring on its left leg. Also here 1 adult GBB Gull, 4 Common Gulls, Cormorant and 20 Lapwings. Elsewhere on the reserve were 6 Bullfinches, single Green Woodpecker, Redpoll, Goldcrest and Song Thrush. At least 10 Wood Pigeons were gorging on Guelder Rose berries.
Posted by Cliff Gorman at Saturday, December 22, 2018 No comments:

Posted by ASmith at Thursday, December 20, 2018 No comments:

Posted by ASmith at Wednesday, December 19, 2018 No comments:

Water Pipit early this morning, a new bird for me - I arrived before dawn and waited for the bird to come to me - it fed for 30 minutes and then left without being disturbed. I left shortly after.
Just explaining as the usual suspects on Twitter are complaining that I got too close to the bird. I put a lot of effort into not being seen by the bird, the horses nor the two walkers with dogs that passed by. Also Kingfisher seen.

In addition the bird was not baited in any way, the nice juicy larvae it was pulling out of the mud were just a selection of different invertebrates it was feeding on. I have posted a video of it feeding naturally. (It's sad that I have had to post this comment due to a personal deformation attack, again on twitter). 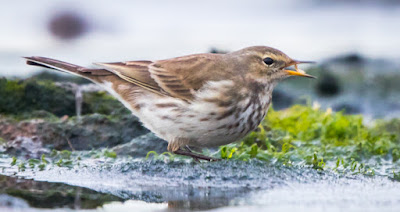 Here with small larvae which were the most prevalent 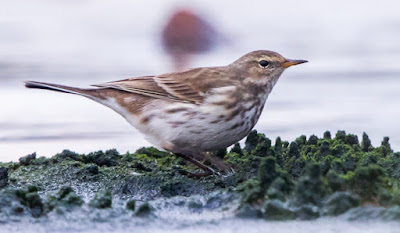 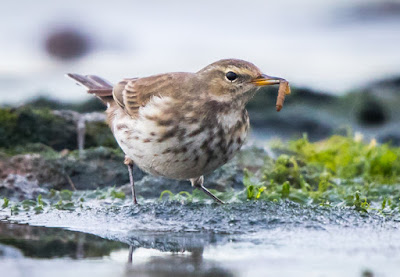 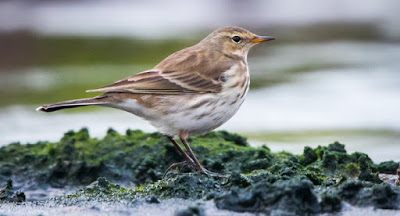 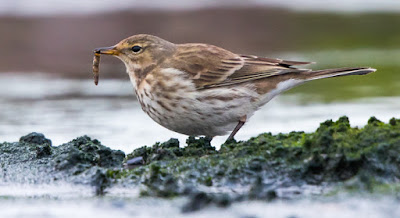 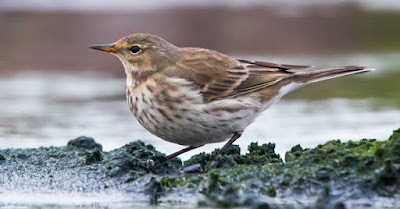 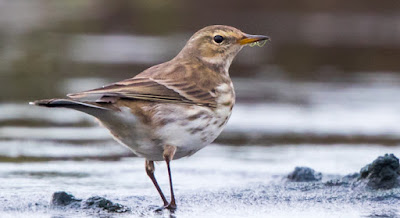 Posted by Peter Garrity at Wednesday, December 19, 2018 No comments:

Like everywhere else it is relatively quiet. Today's sightings included 22 Herring Gulls 5 Common Gulls, Cormorant, Kingfisher, Shoveler, Tufted Duck, Buzzard, 20 Fieldfare and 50 + Redwings. A Green Woodpecker was repeatedly 'Yaffling', a Water Rail was seen on one of the islands and a Willow Tit called from the wader scrape viewpoint. This species of concern is certainly proving difficult to find! 65 Magpies were counted coming to roost in  Hawthorns.

Posted by Cliff Gorman at Monday, December 17, 2018 No comments:

No sign of any Pipits but very windy conditions. Main highlights were a flock of c 70 Golden Plover e over the sewage farm and a Peregrine chasing duck over the oxbow pond. Hundreds of Redwings still here stripping hawthorne berries attracting Sparrowhawks with 4 in the area. Also Green Sand, Chiffchaff, L Egret, 2 C Buzzard, Redpoll over and 1 Goosander over e.
Posted by Upland Tyke at Saturday, December 15, 2018 No comments:

Posted by ASmith at Saturday, December 15, 2018 No comments:

The only report today was of 13 Grey Partridge's in a nearby field. (K. Bannister)

Cudworth Common
c50 Fieldfares and a similar number of Redwings.

Cudworth Sewage Farm
A Chiffchaff (Collybita) was feeding in Bramble at mid-day (CG)
Posted by Cliff Gorman at Friday, December 14, 2018 No comments:

Posted by ASmith at Thursday, December 13, 2018 No comments: 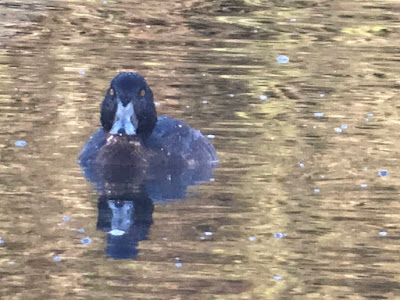 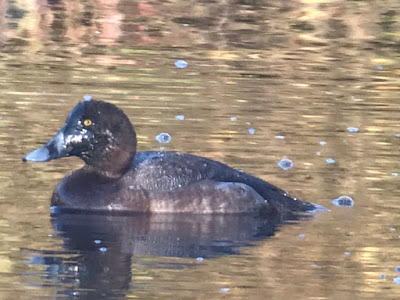 Here are the WeBs totals for the Wintersett Area December 2018.

Barnsley Council Rangers were on site today again doing a magnificent job, in difficult conditions, removing stands of Willow from the main marsh. Thanks to Parks Officer R.J. Boland for organising this.
On the wader scrape this morning 20 Herring Gulls, 8 Common Gulls, 1 Little Egret, 3 Cormorants and 3 Snipe.
Posted by Cliff Gorman at Thursday, December 06, 2018 No comments: 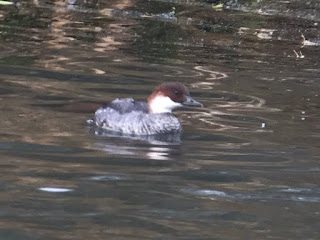 Posted by ASmith at Thursday, December 06, 2018 No comments:

Posted by ASmith at Wednesday, December 05, 2018 No comments:

Late aft., - Presumed over wintering Water Pipit still present. Feeding party of 4 Chiffchaffs were at the sewage farm, 2 of which seen well were collybita. Also 2 Green Sands here. Nearby, 2 J Snipe, 1 C Snipe, party of 10 Goosander through looked to be heading towards Bretton.
Posted by Upland Tyke at Wednesday, December 05, 2018 No comments: 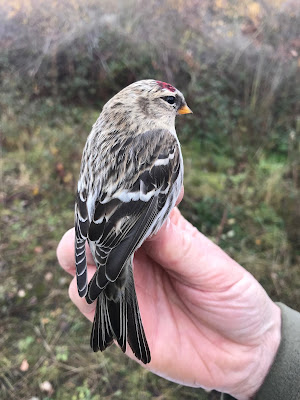 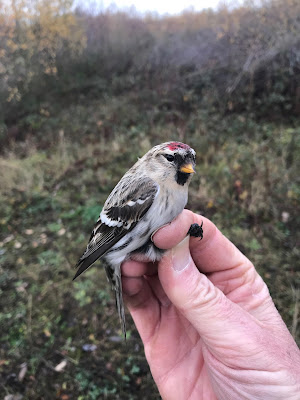 The wader scrape was busy with gulls coming and going. At 09.30hrs there were 88 Herring Gulls, 10 Common Gulls, c175 BH Gulls and 3 Cormorants.
Elsewhere 3 Shovelers, 2 Kingfishers, 5 Grey Partridges, Treecreeper and Mistle Thrush and Song Thrush sang briefly.
2 immature Mute Swans came in from the north and alighted on the northern meadow at mid-day, before leaving south.
BMBC Rangers were removing scrub from the main marsh and will continue weather permitting over the next week.
Posted by Cliff Gorman at Tuesday, December 04, 2018 No comments:

A mild 8 - 4 degrees  with 8/8 cloud and a light south westerly.
Anglers CP: The juvenile male Scaup showed in front of the hide in fading light at 15.30 hrs but showing some grey feathers on back and panels of off white on flanks -per Pete Griffin.  Greylag Goose 103.  Pink-footed Goose 3.  Whooper Swan 5 flew south at 12.05hrs.  Snipe 2.
Wintersett Res: The juvenile female Scaup was in the north east corner.  Goosander 11 + 6 ACP.   Little Grebe 8 + 1 ACP.

The next meeting will be held at 7:15pm at Old Moor on Thursday 6th December.

Richard Hill will be giving us a talk on the breeding birds of the Redmires area of Sheffield.  Richard is a very good speaker and his last talk for BBSG was one of the best we have witnessed.

Message sent on behalf of Pete Middleton
Posted by Carlos at Sunday, December 02, 2018 No comments: