Very steady for birds. Better for fish. 3 Parakeets includes 1 calling from a new area. L Egret, GS Pecker, Sedge Warbler and Yellowhammer still singing at w end. Good for Chub in the warm weather with c60 seen, some about 18 inch long. Hundreds of Minnows.
Posted by Upland Tyke at Sunday, May 31, 2020 No comments:

Today's highlights were; Buzzard, Sparrowhawk, male and female Kestrel, Kingfisher, Little Ringed Plover , 120 Herring Gulls and Cuckoo. New broods of 5 Gadwall and 2 Coot were on show and a Small Copper butterfly was on the wing. (J. Plant/CG)

Cudworth
A Little Owl was singing on a lighting tower at the Dorothy Hyman Stadium at 23.00hrs last night. (CG)
Posted by Cliff Gorman at Sunday, May 31, 2020 No comments:

13 - 19 degrees with 0/8 cloud and a light north easterly.
Wintersett Res:  2 Cuckoos were heard this morning - 1m on the west bank + 1m in Wintersett.  Village.  A family of 4 Willow Tit were seen on the north east bank .  At least 4 young Treecreepers were in the Willow Wood.   11 Common Terns were flying over and around.   69 Herring Gulls flew north at dusk.
Anglers CP: 2 Little Ringed Plovers and 2 young Oystercatchers were on the islands.  Little Grebe 2.
Moorhouse Lane Ponds:  4 large/fledged young  Mallards were on Big Pond.
Lepidoptera: A Large Skipper,  a Meadow Brown and a male Orange Tip were notable this morning at Moorhouse Lane Ponds.
Flora: Two Common Spotted Orchids were seen at MLPond.

Very steady and birds scarce at times. Again not many raptor species with Hobby, 7 C Buzzards, 2 Kestrels. Swift movement began mid aft with c 120 north. Raven 3, Cuckoo 2 males with 1 showing well on the ground. Pair of Ring Ouzel and a family party of Stonechat showed well at the cabin . Golden Plover 3, 1 chipping Snipe, Meadow Pipit c 40 with some in pairs and 2 feeding young. Willow Warbler sang constant at the cabin + pair of Stock Dove.
Posted by Upland Tyke at Saturday, May 30, 2020 No comments:

Oxbow pond. GW Egret and L Egret early morning + Lapwing with chicks. GC Grebe with a chick on the Fleets Dam could be the first ever.
Posted by Upland Tyke at Saturday, May 30, 2020 No comments:

Very quiet birdwise now the highlight being a male Cuckoo singing and a 'Hepatic' female babbling. (Jim Plant)
This afternoon 6 pairs of Tufted Duck were present and the female Cuckoo. The shots below were the best I could do.
Insects included 5 Four Spotted Chasers. 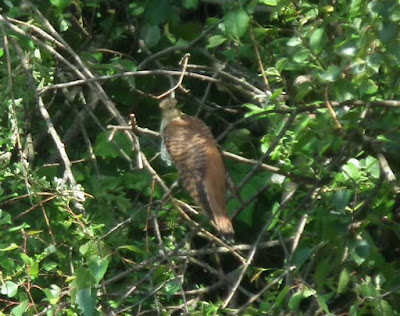 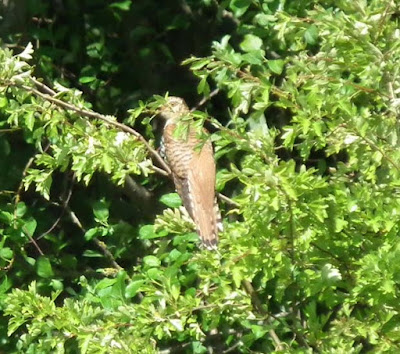 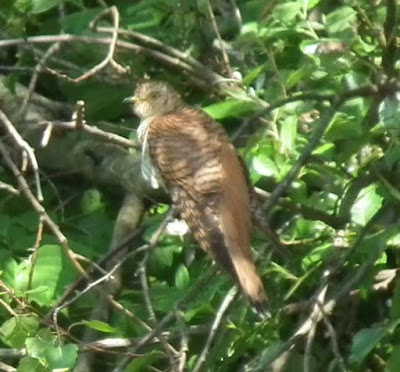 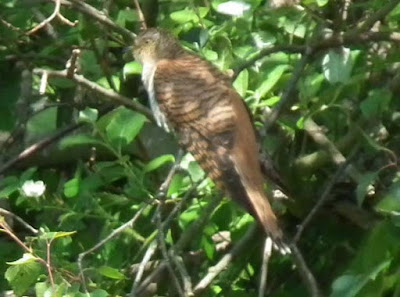 Out from 6.30-10pm in the evening sun covering a couple of areas on the moorland edge.

Highlights were a Nightjar pair seen well as they left a young tree plantation and flew a short distance onto the moor and landed, before returning overhead soon after. Churring first noted at 9.22 and becoming more frequent afterwards. Another male sang in the area too.

A Long-eared Owl silently flew low over the moor as light faded and out of sight - excellent to see. Also, 2 Cuckoo’s called, one giving great nearby views sat on a fence post.

5 singing Spotted Flycatchers were seen across 3 locations within a half-mile stretch, Willow Warblers still sang well and were fairly numerous with 3 each of Blackcap and Chiffchaff.

Curlews (c25) called throughout and many alarmed with presumed young nearby although I only saw one juvenile in the long grass. Lapwing also alarmed and 2 Snipe chipped on territory. Linnets were very apparent in separate small parties totalling 30 overall, as were Goldfinch and Meadow Pipit with at least 4 of the latter seen food carrying.

I counted 6 singing Skylarks plus 10 Swift flew overhead in pairs and a Raven circled above the reservoir.
Posted by Dave Woodriff at Saturday, May 30, 2020 No comments: 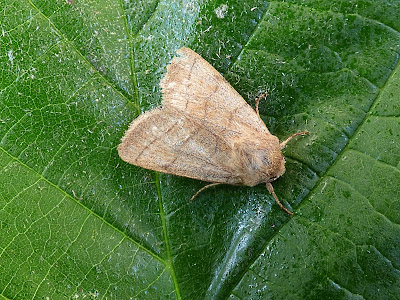 
Red-legged Partridge have bred in Les Corrall's Cudworth garden.
Posted by Cliff Gorman at Friday, May 29, 2020 No comments: